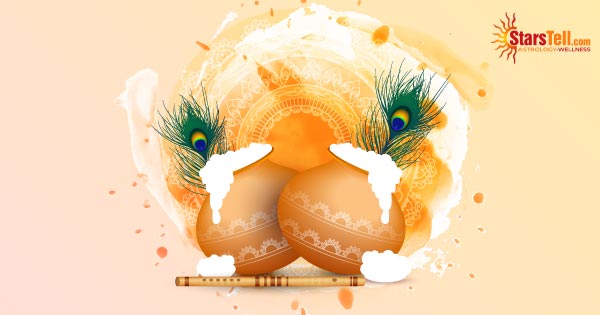 Birthday of Lord Krishna is celebrated as “JanmashtamiVrat” across the globe by the devotees of Shri Krishna, known as ‘Vaishnava’. It is a Hindu festival, which comes on the Krishna Ashtami tithi, of dark lunar half, in the month of Bhadrapada as per our Indian Hindi calendar. This year it is going to be celebrated on Tuesday, 11 August 2020, during midnight, by the ‘Smaart’ people and ‘Vaishnava’ people will observe ‘JanmashtamiVrat’ on the next day. Believers of Hindu religion and devotees of Shri Krishna observe day-long fast to perform puja at midnight as it is mentioned in our ‘Shaastra’ that Lord Krishna took birth in ‘Abhijit Nakshatra’, which comes in midnight time. It is a very surprising fact that the Moon remains in Her exultation sign, Taurus, every year on the eve of Janmashtami. This phenomenon happens every year without fail. Instant Astrology Consultation with Expert Astrologers

Torrential rain is another ingredient of this tithi and if the Moon’s own nakshatraRohininakshatra accompanies Taurus sign that glorifies this festival very much. In our mythological scriptures, it is mentioned that Lord Krishna was exchanged with the baby girl of Yashoda and NandGwala to save Him from the cruel hands of Kans, the maternal uncle of Shri Krishna and the king of Mathura. Kans was aware about the fact that the eighth child born from his sister Devki and Vasudev will kill him in due course of time. Frightened by the terror of death, King Kans imprisoned both of them and brutally killed every child of them till the seventh one. Kans was a very cruel and monster like king. So, Bhagwan Vishnu decided to take incarnation, as eighth child of Devki and Vasudev, to kill him and to give people of Mathura respite from his barbaric rule. Talk to Astrologer for More details

People decorate beautiful cradle and place the idol of baby Krishna, popularly known as ‘BaalGopal’ and offer puja during midnight time, with various types of milk products and other items of offerings. Preparing the scene of Mathura, where Lord Krishna was born, is a very popular practice by the people and they try their level best to give it an artistic touch, to make it a perfect art work and pleasing to the eyes of the spectators. Depicting the scenes of various Baal Leela of Shri Krishna is accompanied with this practice widely throughout India. Now-a-days, presence of Krishna devotees worldwide is making it an International Festival to be celebrated across the globe. Talk to Astrologer in Your Languages