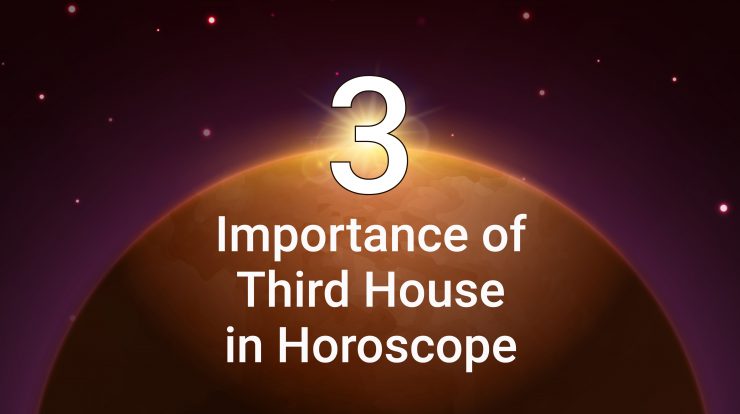 According to Vedic Astrology third house is also known as the ‘Upachay’ house of a horoscope, which usually indicates the person’s younger brother sisters, courage, patience, singing, yoga practice.

It is known as ‘Bhratri than’ or ‘Parakram bhav’ in the Hindi language. Other than the above-mentioned points, nose, ear, voice, beauty, music, love, comfort is also signified by this house.

Seven planets rule over this house as per their ownership of the sign, namely, the Sun, the Moon, Mars, Mercury, Jupiter, Venus, and Saturn.

the native financially strong, highly reputed, having favor from government bodies to stay ahead of others.

as the Sun will be the ruler of the house of expenditure.

The presence of the Moon in the Third house in Taurus or Cancer sign generally gives a person interest in exploration,

sweet voice, and ability of singing and of a kind nature.

If it is happening in the Scorpio sign then the person might have a rough or inappropriate speech for no valid reason.

Mercury in the Third house in Gemini and Virgo sign gives effortful nature and fondness of traveling.

Learn about your 2020 horoscope predictions from StarsTell

The presence of planet Mercury in the Pisces sign in Third House is not an assertive placement of the planet for the native.

Decision-making capacity might remain poor to create hindrances in crucial moments of life.

Jupiter in the Third house in Aries, Cancer, Sagittarius, or Pisces sign could make a person honest, helpful, and straightforward by nature.

Losing temper quickly might also be there with them.

Generally, the placement of Jupiter in the Third house gives a disturbing financial condition.

People get attracted to them very easily. But if the sign is Capricorn then the person might have dishonesty within him or her.

Venus in ascendant in Taurus, Libra or Pisces sign can make a person artistic,

fond of luxurious life and perfectionist, in general.

dependable in some cases.

Trouble from members of opposite sexes may come without any provocation.

If the placement of Saturn happens in the first house in Libra, Capricorn,

or Aquarius sign then the native will be hardworking, punctual, thoroughly thinker, and slightly slow in action.

Talk to an astrologer to get comprehensive personalized solutions for career, marriage, job, love, and much more.