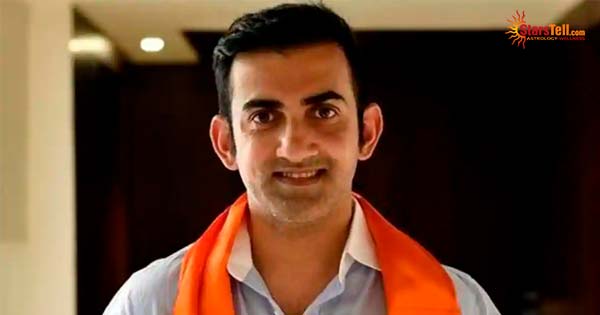 An Aries native by Moon sign, he is having a fiery temperament because of the influence of the energetic planet Mars, his ruling planet.

Mars is ideally occupying a friendly sign, Leo, in the fifth house of talent to create a very powerful ‘Kendra-Trikona Raaj Yog’.

Retrograde Mercury placed in the seventh house of his birth horoscope which is responsible for his adorable and younger look.

Combust condition of Mercury, Jupiter and Saturn is not a very assertive point for her to make him rise high in his sports career through tough struggle and perfect work only.

Association of the Sun, Jupiter, and Saturn together is confirming about staying active in more than one stage to let him achieve a reasonably fair amount of success.

In his horoscope, a unique combination of planets is forming an unusual and rare ‘Yog’ to offer him an upper hand in life.

‘Vipreet Raaj Yog Karak’ placement of Jupiter is a blessing for him to create auspicious contacts and favourable situations around to equip him with abundant of fortune, name and fame.

His chart is having the Sun, placed in the sixth house of competitions and health, in the earthy sign Virgo, to make his efforts result-oriented to work on a huge platform.

Because of the aspect of Mars on Venus, placed in the eighth house only, he will be able to project a clean and honest image in every sphere of his life.

Second house lord, Venus, is aspecting second house, from Scorpio sign, which is creating an excellent wealth-producing ‘Yog’ in his favour.

The Sun is throwing His aspect directly there on his 12th house of foreign connections to offer him success aplenty, world-wide.

Divine aspect of the most auspicious planet of our zodiac, Jupiter, is there on his tenth house of profession, twelfth house of expenditure and on his second house of finances too, to protect him from negative vibes and unwanted incidents.

Jupiter is the ruler of the ninth house of luck, in his birth chart, placed in the sixth house of vitality, again reconfirms his wide fame, because of throwing aspect to His own sign, Pisces.

Talking about Gautam Gambhir current MahaDasha and AntarDasha sequence, the main period of Mars has started from April 2019.

That has pushed him towards the political plane and allowed him to win his debut election contest of LokSabha seat from east Delhi and become a member of parliament. Mars/Rahu sub-period, from September 2019, is just ended in September 2020, that was not so favourable time for him.

Now, it is sub-period of Jupiter in operation, to be the best time for his political career, because Jupiter is aspecting the tenth house of career.

He should remain cautious about his health to maintain best fitness condition without any problem because Jupiter is occupying his sixth house of diseases.

Jupiter, combust in the sixth house, in Virgo sign, ruled by Mercury and Mercury is retrograde and expecting his Moon sign Aries directly.

Next sub-period of Mars/Saturn will continue till October 2022.

Mars/Mercury sub-period followed next and will be in effect until October 2023.

Although planet Mercury is the ruler of the third house of efforts as well as the sixth house of struggle, still, presence of Mercury in Libra sign will protect his existing social reputation.

But, he should remain careful in his personal as well as emotional relationships as retrograde Mercury rules the sixth house of the dispute also.