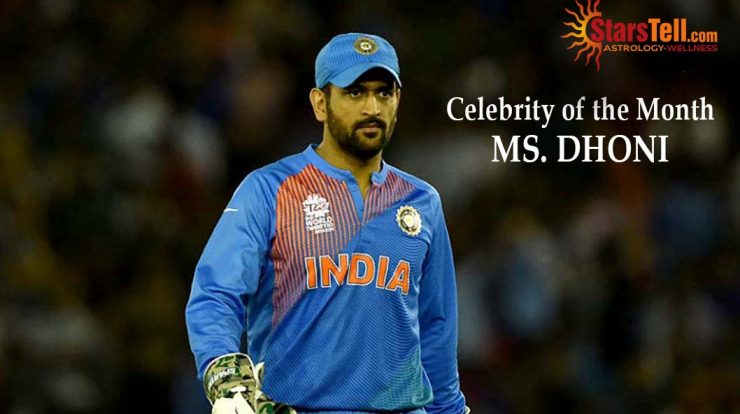 Born on 7th of July 1981, M.S. Dhoni is a Virgo native by Moon sign, according to Indian System of Vedic Astrology. The intelligent planet, Mercury is his ruling planet, which is ideally occupying own sign Gemini, with the Sun, in the tenth house of career, in his birth horoscope. Placement of Mercury is a very assertive point for M.S. Dhoni to make him rise noticeably in his professional career. Association of the Sun and Mercury together in Gemini sign, in his tenth house of profession, is confirming about his versatile talent in the game of cricket to offer him great success. It is known as ‘BudhAditya Yog’ that gives excellence of brain. Jupiter, the Moon, and Saturn are together in his ascendant also creating ‘GajKeshari Yog’ in a Kendra house to bless him with financial bliss.

Fifth house lord Saturn is also there in his ascendant to form ‘Kendra-Trikona Yog Kaarak’ placement to his advantage. Jupiter’s placement in the ascendant is a very auspicious placement to give a magnetic personality, honest and helpful nature, name and fame. His chart is having Venus and Rahu placed in the eleventh house of income to let him earn a handsome amount of money, from foreign connection also. Venus is the most auspicious planet for him and ruler of the ninth house of luck also. Because of the aspect of Mars on his third house, he will remain effortful to deliver the results that are expected from him. Eleventh house lord the Moon is occupying the first house in Virgo sign, which is creating an excellent ‘Dhan Yog’ in his favor.

The Sun is placed in the tenth house that is an excellent placement for success in career front. Divine aspect of the most auspicious planet of our zodiac, Jupiter, is there on his ninth house of luck, seventh house of social reputation and on his fifth house of talent too, to protect him from negative vibes and untoward incidents. His chart confirms his wide fame because of Jupiter is throwing aspect to His own sign Pisces. Perfect placement of Ketu, in his fifth house of talent, is another assertive point for him to be blessed with a unique talent in the game of cricket to play the role of a game changer, most of the time.

Talking about his current Maha Dasha and Antar Dasha sequence, Rahu/Moon sub-period is going to continue till November 2019 to let him enjoy uninterrupted success in his innings. Next, the sub-period of Rahu/Mars will be a stable time for his career because of Mars is the most energetic planet of our zodiac. He should remain cautious about his health to maintain best fitness condition without any problem because Rahu is aspecting his fifth house, that governs our stomach, digestive system, which is very important for a player. The sub-period of Rahu/Mars will continue until December 2020. The main period of Jupiter will be there next and will be in effect for the next 16 years. Planet Jupiter is the most auspicious planet of our universe, so, the main period of Jupiter will bless him with significant growth in his financial equation, but, he should be careful in his personal as well as social reputation, as Jupiter rules fourth house and seventh house in his horoscope.

We wish him all-round success in his upcoming matches and other ventures!