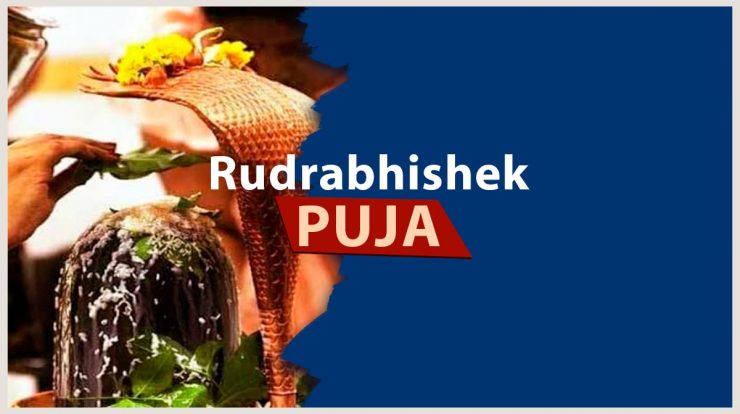 ‘Rudrabhishekam’ generally, performed to maximize the possibility of revival of a person battling with any fatal disease or critical health condition.

It is to performed by an experienced Panditji as per Hindu rituals and the Vedic method.

with chanting of relevant ‘Mantra’s, to please Lord Shiv Jee, to bless the person with a new lease of life.

The most auspicious day to perform this religious function is on ‘Maha Shivratri’.

Otherwise, Mondays of the dark lunar half of any month are also appropriate to perform this auspicious function, to invite blessings of Lord Shiv Jee.

Shravan month of our Hindi calendar is also preferable for this ritual. It comes when the Sun travels through the Cancer sign in the sky.

There are many stories available about the worship of Lord Shiva and the coronation of the ‘Rudrabhishekam’.

But, one of the major stories of them as follows: Once Brahma Ji’s desire to know about his birth and origin aroused very strongly and He went directly to Lord Vishnu Ji to get authentic information in this context.

Lord Vishnu Ji told Him that you originated from the lotus in my navel. But, Brahma Ji was not ready to buy this version of the story.

Then both of them went to Lord Shiva Shankar Ji to resolve their doubt.

who will find out this first, but both of Them could not be able to know.

It is believed that the ‘Rudrabhishekam’ helps to solve all the problems of one’s life.

Every living being has some other difficulties in their lives. To get out of these worldly troubles and to achieve ultimate pleasures, Lord Shiva worship with full devotion, and ‘Rudrabhishekam’ performed.

Lord Shiva also known as the God of the ‘KalYug’, so, worshipping Him also gives freedom from the bondage of life.

If any kind of problem is there in your life, such as physical discomfort, serious illness, economical problems, the desire for materialistic comforts, the attainment of children,

the lack of marital happiness, the lack of luck, the problem in job or business, you can take advantage of this special opportunity. On the occasion of Mahashivratri, StarsTell is organizing Rudhrabhishek Puja.