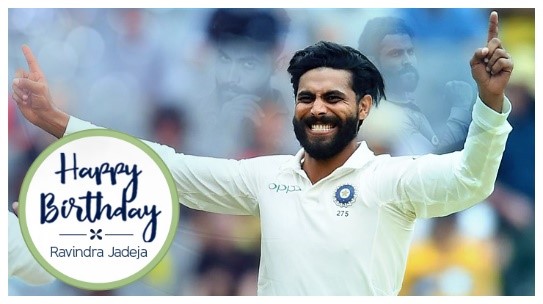 Having made his mark on the big stage, here’s what Ravindra Jadeja’s horoscope predictions reveal on his birthday

Ravindra Jadeja is one of the most celebrated cricketers across the country, well-known for his talent and steady left-arm spin. A true inspiration, he became one of India’s premier spinners and a key player across different formats. His performance has reached at its peak and is yet to achieve the pinnacle of glory. Being capable of laudable performances, Ravindra Jadeja needs to maintain his form and fitness.

Stargazers at StarsTell study the movements of the heavenly bodies and predict the future developments on his birthday!

Ravindra Jadeja comes from a humble family background. His father was a watchman for a private security agency and wanted him to join the Indian Army. Since his childhood days, Ravindra Jadeja knew the importance of hard work and developed his skill and interest in cricket.

He proved his mettle by giving an all-around performance in the 2008-09 Ranji Trophy, and later becoming an important part of India’s World Cup-winning Under-19 squad. The highlight of his career was when he made it to the Indian Cricket team and became a role model for the youngsters. Looking at his astrological chart, the astrologers at StarsTell predict a catalogue of success as Jadeja would continue to stay true to his legacy in the coming year.

The study of astrology is transformative and keeps on changing every second. Ravindra Jadeja will be celebrating his 31st birthday this year and is ruled by the curious archer — Sagittarius. Being always on the quest for knowledge, Sagittarians are governed by growth. According to the online astrological prediction at StarsTell, the position of Mars will strengthen his position as a sportsman. Experts at the best astrology site in India, predict that being ruled by the Sun sign will keep this sport star in the high ranks. This year will be promising and Jadeja will continue to be the source of inspiration for many.

As announced, Sri Lanka would be touring India in January 2020 for a three match T20I series and our ‘Men in Blue’ are all ready to take over the field. According to the astrologers at StarsTell, Ravindra Jadeja’s planetary position will benefit him in the series. The Jupiter transit comes with the promise of success for him. His stars will continue to dazzle on his health and relationships!