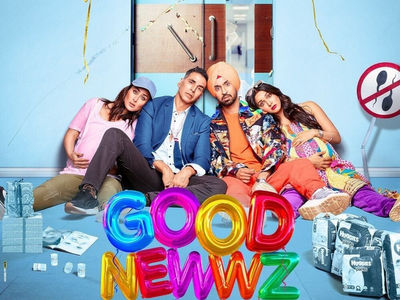 A pregnancy mix-up? Two couples in a ridiculous and funny situation? That is what Good Newwz is all about, with the glamorous romances and fresh love stories, Akshay Kumar, Kareena Kapoor Khan, Kiara Advani, and Diljit Dosanjh starrer is all set for the box office.

Releasing on 27th December 2019, the movie is directed by Raj Mehta and produced by Karan Johar under the Dharma Productions banner. It shares the theme of romantic comedy and is filled with drama, and is about the biggest goof-up. The duo of Akshay Kumar and Kareena Kapoor Khan will be seen together on the big screen after Kambakkht Ishq (2009) which is an exciting piece of news for the audience.

The plot is about both couples who are trying to have a baby through IVF at the same clinic. Both the couple share the same surname, Batra and that is what leads to a sperm mix-up. This leads to confusion and a hilarious journey begins!

As per Good Newwz predictions from the astrologers at StarsTell, the movie comes with a promise of success and prosperity, as the movement of lord Jupiter will give the film full support from the audience. A lot of youngsters and couples will be attracted and the film fraternity will praise the screenplay. Even the soundtracks will be a success and continue to entertain for a longer period.

Planetary movements predicted by the astrologers point out that the performances will be the factors that contribute to certain success.

The bright stars of Akshay Kumar and Kiara Advani will contribute to the movie and brush away all the uncertainties regarding the movie.

All lead actors will deliver outstanding performances and won’t get unnoticed. Astrologers at StarsTell signal towards a heavy appraisal from the critics and positive reviews for Good Newwz!

For personalized solutions related to finance, marriage, love, etc., Talk to an astrologer!