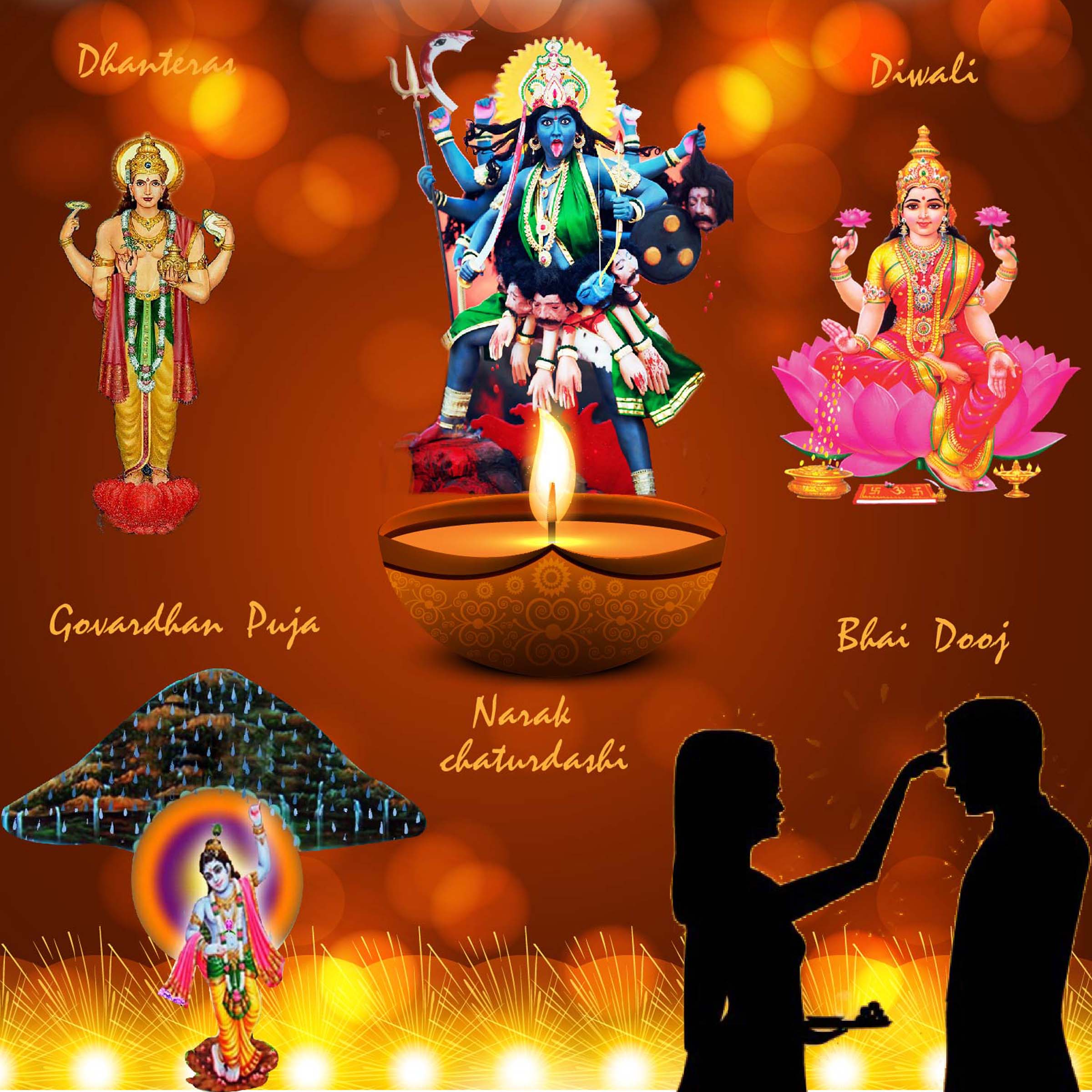 India is a country of culture, celebrations, diversity and colours. All this can be, easily, felt and witnessed during the festive season of Deepavali in every corner of this country. Widely celebrated, across the country, in every household Deepavali or Diwali is a festival where people from all age groups participate to celebrate it for five consecutive days. Lighting the earthen ‘diyas’ (lamps), festooning their houses, bursting firecrackers etc are some ways through which joy and happiness are expressed in the festive occasion. A sumptuous feast is also arranged where near and dear ones are invited to celebrate the auspicious day together. Lighting the diyas is the way of expressing gratitude and paying obeisance for attainment of health, wealth, knowledge, peace, valour and fame.

On the night of the Diwali, little clay lamps (diyas) are lit in Hindu homes, but now a days, coloured electric lamps are used as a substitute. Little girls adorned with silk frocks and fine jewelleries look out for the best sparklers and flowerpots, rockets and Vishnuchakras that light-up the night like a thousand stars. Grown-ups are the soul of generosity. Though the competition is stiff yet festive bonhomie surmounts everything else.

What Is The Significance Of Lighting A Lamp?

There is a logical answer to this question. It is through the light that the beauty of the world is revealed or experienced. Most civilizations of the world recognize the importance of light as a gift of God. It has always been a symbol of whatever is positive in our world of experience.

To the Hindus, darkness represents ignorance, and light is a metaphor for knowledge. Therefore, lighting a lamp symbolizes the destruction of all negative forces – wickedness, violence, lust, anger, envy, greed, bigotry, fear, injustice, oppression and suffering, etc through knowledge.

Dhanteras marks the first day of the five consecutive days of Diwali. Also known as Dhantrayodashi orDhanwantari Triodasi, the auspicious day falls on the thirteenth lunar day of Krishna Paksha in the Hindu month of Kartik (October/November). The word “Dhan” in Dhanteras stands for wealth and holds a lot of significance for the business community. To ensure prosperity and well being, people pay obeisance to Goddess Lakshmi.

On this auspicious day, houses and business premises are renovated and decorated. Entrances are made colourful with lovely traditional motifs of Rangoli designs to welcome the Goddess of Wealth and Prosperity. To indicate her long-awaited arrival, small footprints are drawn with rice flour and vermilion powder all over the houses. Lamps are kept burning throughout the night.

The Hindus consider Dhanteras to be an auspicious day to purchase gold or silver articles or at least one or two new utensils. It is believed that acquiring new “Dhan” or some form of precious metal is a sign of good luck. “Lakshmi-Puja” is performed in the evenings when tiny Diyas of clay are lighted to drive away the shadows of evil spirits. “Bhajans”(devotional songs) in praise of Goddess Lakshmi are sung.

The second day i.e. the day before Diwali is celebrated as Chhoti Diwali/Narak Chaturdasi or ‘small Diwali’. It takes the form of a smaller scale celebration of the actual Diwali. Few diyas are lighted and few crackers are burst. On the following day, women of the house adorn the premises with colored rangoli in the doorway and courtyard to enhance the ambience of the house. Tiny footprints made out of rice paste are a special feature of the rangolis made for Diwali. In Hindu homes, Chhoti Diwali celebrations involve a ritual puja and aarti to pay obeisance to God Ganesha and Goddess Lakshmi in the evening. Lighted diyas are placed in the doorway of every home to ward off the shadow and evil influence of Yamraj.

The third day of the Diwali festival is the most important one for Lakshmi-puja. The entire preparation for the day is devoted to hail Goddess Lakshmi. On this very day, the sun enters his second course and passes Libra which is represented by the balance or scale. And thus, it is believed that the balancing sign of the Libra marks the balancing of account books and their closing. Despite the fact that this day falls on an amavasya day it is regarded as the most auspicious.

Lakshmi-Puja always falls on the dark night of Amavasya. The strains of joyous sounds of bells and drums float from the temples invoking Goddess Laxmi to pour out her blessings. The impenetrable darkness is, all of a sudden, pierced by innumerable rays of light for just a moment and the next moment a blaze of light descends down to earth from heaven as golden-footed Goddess Lakshmi alights on earth in all her celestial glory amidst the chanting of Vedic hymns.

Lakshmi Puja is a combined puja of five deities: Ganesha is worshiped at the beginning of every auspicious act as Vighnaharta; Goddess Lakshmi is worshiped in her three forms – Mahalakshmi (the goddess of wealth and money), Mahasaraswati (the goddess of books and learning), and Mahakali; Kuber (the treasurer of the gods) is also worshiped.

The day following the Amavasya is “Kartik Shuddh Padwa” and this is the only day on which King Bali would come out of Pathal Loka and rule Bhulok as per the boon given by Lord Vishnu. Hence, it is also known as “Bali Padyami”. This day also marks the coronation of King Vikramaditya. Vikaram-Samvat was started from Padwa day.

The 4th day of the five consecutive days of Diwali is celebrated as Govardhan-Puja. Govardhan is a small hillock located in Braj, near Mathura. People from Punjab, Haryana, Uttar Pradesh and Bihar build cowdung hillocks, decorate them with flowers and then, worship them. This festival commemorates the lifting of Mount Govardhan by Krishna. As per Vishnu-Puran, the people of Gokul used to celebrate a festival in honor of Lord Indra and worshiped him after the end of every monsoon season. But the young Lord Krishna stopped the people from offering prayers to Lord Indra. This angered Lord Indra which resulted in a deluge to submerge Gokul.

The fifth or last day of the Diwali festival is Bhaiya Dooj, popularly known as Bhai Dooj. The festival is known as bhai dooj because it falls on the second day after the new moon that is the Dooj day. Widely known as the day to pray for the long life of the brother, it surrounds a myth about the brother-sister, Yamaraj and Yami. According to religious scriptures, Yamaraj, the God of death, went to visit his sister’s house after a period of long separation. His sister, Yami, was very happy to see him and welcomed him by putting an auspicious mark on his forehead for his welfare. Yami and Yamraj, then, shared a sumptuous meal. Pleased with his sister’s reception, he proclaimed that every year, on the dooj day, if a sister puts a tilak on her brother’s forehead, then no one can harm her brother. Ever since that day, the tradition has been followed till date. Sisters perform puja for their brother’s safety and well being. The brothers, in return, shower gifts to their sisters as a token of love and gratitude.