Place Order
Fill In Your Detail 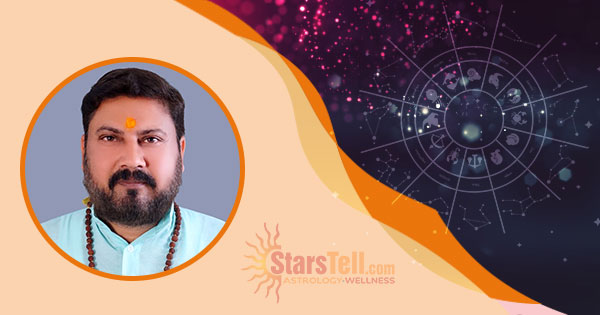 Acharya Jigyasu did his masters’ degree in 'Jyotir Vigyan' from Lucknow University and attained his 'Shastri" and "Acharya" title in Jyotish from Gurukul Vishwa Vidyapeeth, Lucknow – India.

He was initiated into astrology by 'Prakriti' (nature) via divine blessings, and soon astrology, and helping the society (Seva) became his passion, a way of life & ultimate duty (Dharam).

He strongly believes that destiny chose him to repay the debt of his past life (karmic baggage) through astrology by serving people and society through his knowledge. Providing guidance to the people who seek his help through astrology consultancy.

He has been honored with many degrees and decorations in the field of Astrology, Horary, Vaastu Tarot, Sagun, Shastra etc.

His exhaustive knowledge of Vedic astrology and philosophy has made special contributions for the common man. He has done special work from spiritual and religious perspectives at pilgrimage places and specific places of worship in India.

With divine influence, Acharya Jigyasu, who used to be a senior corporate manager with all materialistic wealth, got inspired to discover 'Self' and the reason for his birth on this planet. Thus, he started studying astrology and researching the principles of Vedic astrology including Vedang, Upnishads, Jyotish and ancient texts in his spiritual journey; and hence started unfolding the secrets of Vedic astrology.

This inquisitiveness took him to 'Kakatpur', a small village in Orissa where he got answers to his questions – from a 16th century 'Poothi' of Shri 'Achyutanand Das' who has the power to see the past, present and the future. (about ‘Poothi’ or ‘Oracle’: The Poothi is an organic instrument that reads the questions in your mind. These questions are relayed by Pt Amreesh Mishra; and the great saint of the 16th century Saint Achyutanand Das answers your questions through it as well). On the command of the sacred and pious Poothi, it was conveyed to Aacharya Jigyasu  to perform 'Seva' to mankind through his abundant knowledge of astrology and his religious guidance.

He is one of the rare, progressive & unconventional Vedic astrologers in India who are well educated, highly qualified, tech-savvy, widely traveled, straightforward with a logical bent of mind – and who is one of the fastest emerging global brands in the field of Indian Horoscope Astrology; Given the said qualities – Acharya Jigyasu is therefore one of the most sought after astrologers in India today. He only took up Astrology as a full-time profession after years of testing it thoroughly via his research on many hundreds of horoscopes and proving it relevant and effective. He is recognized nationally as well as internationally – as a respected astrologer today for his clean approach towards Astrology as he doesn't encourage superstitions in any manner & never misleads his clients in the name of baseless remedies which are practiced and recommended by many other astrologers in an order to make high financial gains.

Starstell.com Astrology Services Portal is a one-stop shop for all your astrology and related services. You can talk live with a professionally qualified astrologer; to get consultation on all kinds of astrology related information-predictions and remedies on love, marriage, career, business, health, numerology, panchang, compatibility etc.

Regional USP: - Our nationwide presence provides you an ease to understand your solutions in your preferred language.(i.e., a caller from Kolkata could talk with an astrologer in Bengali, caller from Maharashtra can talk to an Astrologer in Marathi, etc

Q: Is this service reliable?

Yes. Starstell is one such service that provides guarranteed consultation. Our astrologers are professional, dedicated and determined to deliver high quality services always.

Q: Will your guidance help in changing my future?

Yes we believe in our service and can assure you that our guidance and remedies will be helpful in bringing about some major positive changes in your life and future.

Q: Will my personal information remain confidential and private?

Yes. According to our policy, all the informations shared to us will be kept 100% confidential. We do not share the details of our customers with anyone.

Q: Will I get to speak with the same astrologer every time I call?

Subscribe our newsletter to receive the latest updates and promotions.


Product has been added to cart