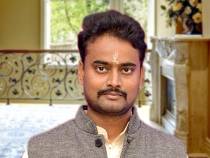 Expert Astrologer Acharya Purshottam is a post graduate in management and holds a professional degree in Astrology, With inborn Intuitive Instincts and an advisor all his life, he realized his mission to be an Occultist, practicing and teaching various forms of Predictive Sciences- Astrology, Vastu and geopathic

Acharya Purshottam has been awarded for his excellency and work in the field of Astrology , he strongly believes in law of Karma " What goes around comes around". He has more than 23 years of experience in the field of predictive sciences. he has actively participated in various astrology seminars conducted in various states and guided people in distress.he has conducted many LIVE TV shows

Acharya Purshottam dedication in the field of Astrology and predictive sciences has been well recognized. he has received following awards :